Learning To Be Loved

“Hey, Donnie! You’re a strong, responsible young man. Would you consider coming on the One Voice choir tour next month to be the choir rodie?” said Marc Schwerin the Youth Director. “Depends”, I said. “What’s a rodie do on choir tour?” And just like that, I was adopted into a world of radicle love. I didn’t realize it at the time, mostly because I didn’t know anything different, but I was what you might call a pew sitter. I came to church and Sunday school because my parents made me. I put in my time because it was easier than receiving the wrath of mom and dad. But after the first few days of that choir tour, back in 2012, I became a different person and began to see the world through different eyes.

I can tell you the exact moment that I decided I wanted to become a member of One Voice. We were doing a concert at the Bethesda Mission in Harrisburg when I felt a sensation that I had never felt and will never forget. Bethesda Mission is a shelter where people come from a place of living on the streets to a place of self-sufficiency.  A place where people recover from their addiction and re-learn the basics of life. A place that I will never forget. I had been carrying risers, moving sound equipment, setting up the hand bells and organizing the programs. (By the way, I found what a rodie does on choir tour – anything you’re asked!) I was hot and I was tired. The building we were in resembled a church with stained glass windows and rows of blue chairs. There was a small stage at the front that had the most curious lean to it. As I slowed down I began to appreciate the coolness of the air conditioning and could smell the lingering aroma of cigarettes. And one by one the men filed into the room.

We knew that these men had been homeless and most of them were recovering addicts. We also knew that worshiping was a requirement of the men to stay in the program. With that said, I wasn’t expecting much. They each greeted me with a smile and said “thank you” as I handed them a program. As the concert began, Mark Ray came over and told me he would need some help on stage so I moved to the front of the room. I was looking into the crowd and noticed as choir began to sing the faces of the men began to change. Just moments into the first song they began to clap with the rhythm and tap their feet.

By the end of the song we heard the room filled with loud shouts of “Amen!” This was going to turn out okay. After another song Mark took me by the arm and told me that he and I were going to have to help Kristin so she didn’t fall off the stage. Kristin was an alumni of One Voice who was on tour with us. Kristin dances in a wheelchair, which is really cool. Because of the slant in the stage, Mark and I positioned ourselves so that we could catch Kristin if she came too close to the edge.

The more we sang, the more the men shouted. The more they shouted, the more affirmed we felt. And so went the cycle of love and affirmation until the last song, Going Up Yonder. Between the other concerts and practices it felt like I had heard this song a hundred times. The choir was instructed to go and line the walls and do something they called ‘surround sound’. One of the guys in the choir grabbed my shirt and pulled me in line with him. As we began the song, the members of the choir begin to go and get some of the men who were seated in their chairs. Just a few bars into the song everyone had been invited into the circle and was either holding hands or had their arms around one another. I’ve never felt anything like it.

I remember so many wonderful times from that first trip… the smell of chocolate as we drove through Hershey, the fun we had on the roller-coasters at Hershey Park. The new friends that I didn’t know would become such a big part of who I am today. And the lessons I’ve learned and the experiences I’ve had over the past four years have shaped me, molded me into a person who sees and thinks differently. I understand the meaning behind the words of the songs we sing. I feel so much emotion when I sing I Believe because I’ve learned about the words, the words that were written on the wall of a concentration camp. If someone in a concentration camp doesn’t give up, how could I? The forgiveness I feel when we sing Amazing Grace. The songs have taught me about God, about justice and about grace. I also have had opportunities to meet people, understand people, different from me. I will never drive past a strip club without thinking about the wonderful, brave women we met at Scarlet Hope. I will always see a homeless person as a person, just like me, because of my experience at Fourth Avenue UM. I’m different because of it; a wonderful kind of different.

And Dan and Mark Ray and Ben...I’ll never forget them, either. They taught me how sing, how to serve and how to see people differently. They taught me the meaning behind the songs and that the payoff was great if you were willing to invest the time. They taught me what it looks like to lead, to be courageous, to stay humble and what it looks like to be a godly man. There are so many other adults that poured themselves into me and gave me the confidence and love to be who I am today. I have a tight-knit group of friends, youth and adults alike, where I can be myself; where I can laugh and play and cry and not worry about what they think of me because I know they love me, no matter what.

I’ve slept on hard concrete floors, cleaned nasty bathrooms, painted ceilings and gone to practice when I didn’t feel like it. I’ve sung until my throat hurts, I’ve eaten food I didn’t like and I’ve worn a neck-tie way too much. I’ve laughed until my sides hurt, I’ve seen things I never knew existed and had more fun than I ever expected. I’ve learned how to stretch myself physical, mentally, emotionally and spiritually. I’ve learned how to love and to be loved.

And so here I am, about to go off to college, singing Going Up Yonder as the last song of my last One Voice concert, with tears running down my cheeks. As I look around the circle at the people who mean so very much to me I guess I’m feeling loved. 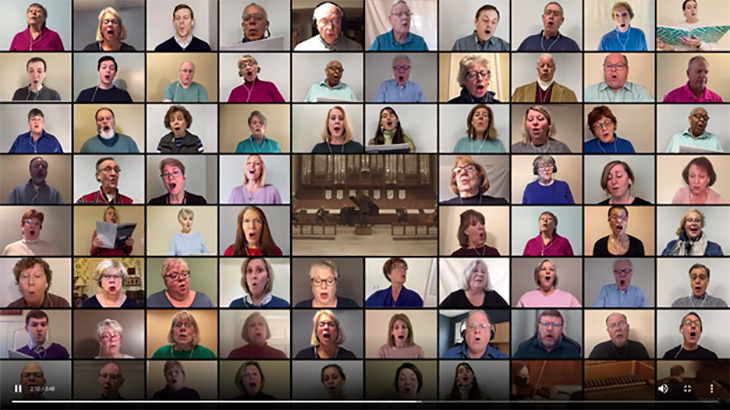 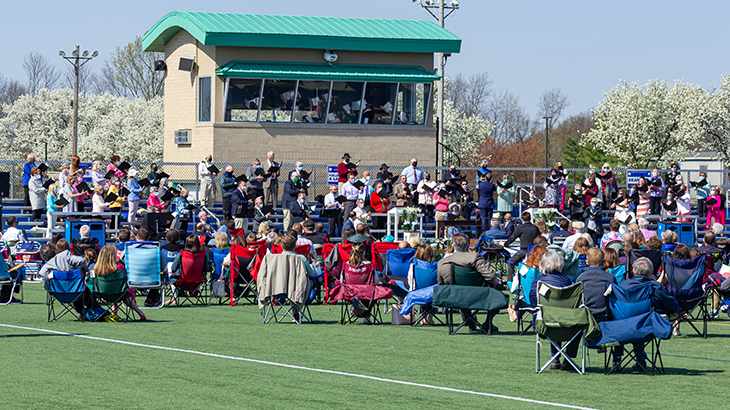